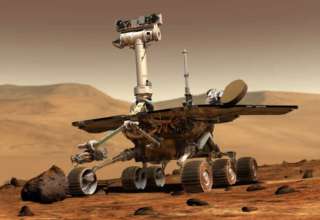 The Chinese Mars Rover Zhurong made contact with the ground on Mars after successfully driving off the lander. This was announced by the China National Space Administration (CNSA) on Saturday. Saturday night at 04: 40 Dutch time, the Mars Rover hit the ground of the Red Planet.

The spacecraft landed on Mars a week ago, but has been standing on a lander ever since, from which it still had to drive. He did so on two rails attached to the lander. In the meantime, tests were carried out to determine whether the Mars rover is in good condition.

Zhurong is now beginning his research on Mars. He is equipped with various instruments with which he will conduct research on topography, the soil and the atmosphere of Mars. The cart also looks for possible traces of life on the planet. The rover is located in the area of Utopia Planitia, where there may once have been an ocean.

The Chinese space agency estimates that the rover will be able to do about 90 days ‘ work. During that time, he sends his findings back to Earth.

A few days ago, Zhurong sent his first photos from Mars to Earth. It shows the front and back of the aircraft.