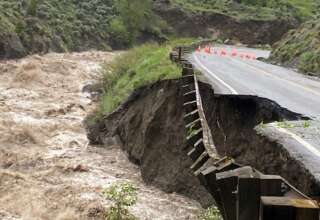 In Yellowstone National Park in the western United States, floods have caused significant damage. As a result, the popular tourist park is closed to visitors for the first time in 34 years.

The floods were the result of heavy rainfall and a rapidly melting snow cover. Reports have come in of washed-out bridges, houses and trees. Major roads have been destroyed or covered by mud and stones. High-voltage masts have also fallen, leaving parts of the park without power. The emergency services are working to determine the exact damage.

Mudflows have isolated some villages and small towns. Residents were evacuated by boat and helicopter. It is still unclear how many people are involved. Also, it is not known how many visitors are stuck in the park.

The emergency services in Park County, where some isolated villages and towns are located, warn people that the water is no longer drinkable everywhere due to the floods. People sitting in a safe place are advised to spend the night there.

All five entrances to the park will most likely remain closed at least until tomorrow. Chances are that the northern part, where there is the most damage, will remain closed for much longer, says the Yellowstone supervisor. The tourist season started two weeks ago.

Montana State meteorologist Cory Mottice was shocked by the storm. “We have never seen such flooding in our lives,” he told the AP. According to him, the worst emergency weather is now behind us. In the next few days it will rain less and it will also cool down, so that less snow will melt.

Yellowstone National Park is a very popular location for tourists traveling around the US. The park is known for its geysers, grizzly bears and other animals, and its beautiful landscapes. Last year, nearly 4.9 million people visited the park. They often stay there for several days.