Home World What is Matteo Salvini going to do now that the power seems to slip through his fingers? 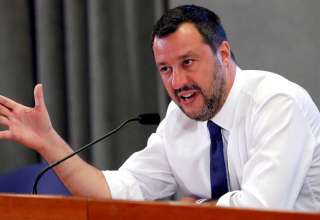 Part one of Matteo Salvini’s dream of conquering Rome went exactly according to plan. At the height of its popularity, he stumbled the government, leaving Prime Minister Conte to resign this week and paving the way for new elections. But now that part two of his plan comes into effect, doubts are suddenly increasing. Does Salvini have a plan B?

The Italian newspaper La Repubblica spoke the day after Prime Minister Conte’s resignation of “the most surrealistic crisis in the history of the Republic”. Everything that seemed right two weeks ago is now crooked and the watertight plan of the new prime minister, the right-nationalist Lega leader Matteo Salvini, now threatens to come back to him like a boomerang. In addition to the new elections he wished for, two new options have emerged from nowhere: a transitional government of technocrats and even an alliance between the populist Five Star movement and the social-democratic PD.

Salvini himself demands new elections, as he has been doing for days, but in Italy only the president can decide on an early ballot. President Sergio Mattarella does indeed consider that. A majority of its people seem to be in favor of a right-wing cabinet. Moreover, a country ready for its 66th government can use a stable government in 73 years. New elections, which must then take place in October or November, would probably result in that.

According to the most recent polls, the Lega can count on around 38 percent of the votes. Together with the even more right-wing party, Fratelli d’Italia, that is enough for a Chamber majority that has everything to stay in power for a long time.

However, Mattarella, who is now in discussions with all political leaders, will also take other interests into account. The most important: the budget for 2020, which must be in Brussels mid-October. If it is not cut back by an additional EUR 23 billion, a VAT increase will automatically take effect that will hit millions of Italians hard in their wallets.

Mattarella wants to prevent that and knows that cutting back is difficult without a government. He is therefore considering a second option, namely whether a new governmental majority is possible based on the current seat distribution. Read: a collaboration between the Five Star Movement and the PD.

For Salvini, that would be the worst-case scenario. It would degrade him from Deputy Prime Minister who in recent months handed the sheets to Italy, to become the leader of an average opposition party with only 17 percent of the seats. It was not without reason that he called on his voters yesterday to protest against this “coup d’état against democracy”.

Political elite versus the ordinary Italian

It is a taste of Salvini’s tactics, should this government coalition actually come. He will then cry as often and as loudly as possible that the will of the people is ignored and that the political elite place self-interest far above that of ordinary Italians.

It is not without reason that the current chairman of the PD already commented on this plan, which might just be “a gift for the dangerous right”. After all, if such a government fails to implement positive changes, Salvini will only become more popular.

This opportunity exists because the Five Star Movement is known as a party that is as changeable as the weather and the PD is also linked to internal arguments. Because of this uncertainty, President Mattarella is also considering a third option, namely the installation of a transitional government. That is a temporary, neutral government headed by, for example, a professor of economics, as was the case eight years ago with Mario Monti. His main task will be to save Italy from financial disasters until new elections at a more favorable time, probably sometime in 2020.

For Matteo Salvini, this outcome would be somewhat acceptable because his party is probably still the largest in Italy next year. Moreover, this scenario appears to be preferable to both Brussels and the financial markets. After Prime Minister Conte spoke out on Tuesday about his resignation against rapid elections, the ten-year interest rate fell to the lowest level since October 2016.

Mattarella wants to make a decision by Monday about the future of his country. That means that at the beginning of next week it will become clear whether Salvini will be the leader of the first right-wing cabinet since the Second World War, or will be left empty-handed as a result of the greatest estimation error of his career.