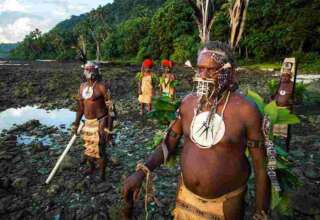 The United States does not exclude military action against the Solomon Islands when this country authorizes China to open a military base on its territory. In more covert terms, U.S. Under Secretary of East Asian and Pacific Affairs Daniel Kritenbrink reiterated an earlier White House warning to the island state. Kritenbrink made his statements after his trip to Hawaii, Fiji, Papua New Guinea and the Solomon Islands.

China and the Solomon Islands have signed a security agreement with each other that, although secret, the concept of which leaked on social media last month. The draft agreement included provisions allowing China to ” conduct ship visits to the Solomon Islands, carry out logistical supplies there, and hold stopovers and crossings there.”

The senior US delegation, which included National Security Council Coordinator for Indo-Pacific Affairs Kurt Campbell in addition to Kritenbrink, arrived in the Solomon Islands on Friday for talks with Prime Minister Manasseh Sogavare. The subject of discussion was the secret agreement that, according to Beijing, the prime minister had concluded with China three days earlier.

There is much to be done about that agreement. The draft version leaked in March set off all alarm bells in Australia and New Zealand and led to an intense wave of lobbying by the US and Australia. Both countries fear the expansion of China’s military reach in the Indo-Pacific. The pressure from Australia and New Zealand has not been able to change Prime Minister Manasseh Sogavare’s mind. The Solomon Islands government said on Thursday that officials had initialled “elements of a bilateral framework for security cooperation” with China. The agency said the government will continue to work with all partners “towards a safe nation where all people can coexist peacefully.”

Chinese Foreign Ministry spokesman Wang Wenbin described the agreement as ” impeccable.” “The agreement will benefit the social stability and sustainable security of the Solomon Islands and the common interest of the regional countries,” he said. The next day the American delegation arrived, much too late.

Asked if the US delegation had asked for access to the agreement during the talks with Prime Minister Sogavare, Kritenbrink replied that it is ” clear that only a handful of people in a very narrow circle have seen this agreement. The deputy minister added that it was worrying that Sogavare had publicly stated that he would ” only share the details with China’s permission.” Which in turn led to protests at home. MPs from the Solomon Islands have now called on the prime minister to make the text Public.

Kritenbrink harshly criticized what he calls ” the total lack of transparency behind this agreement.” He also said other countries in the Pacific and “friends in the Solomon Islands” were also concerned that the agreement had come about behind closed doors. For the rest, Kritenbrink said that the meeting with the prime minister was constructive and frank, and that the US has expressed concern about the security agreement.

We wanted to make it clear to our friends on the Solomons what our concerns are, ” Kritenbrink said. Prime Minister Sogavare indicated that, according to the Solomon Islands, the agreement they have concluded has exclusively domestic implications. But we have made it clear that the agreement can have implications for regional security, not only for ourselves, but also for allies and partners across the region.’

On Tuesday, Kritenbrink reiterated that the US is willing to act in the region if China establishes a military base. “Of course we respect the sovereignty of the Solomon Islands, but we also want to let them know that if steps are taken to establish a de facto permanent military presence, power project opportunities or a military installation, we will be very concerned, and that we will naturally respond to those concerns,” he said. The White House also said it would do so if necessary. In a press release, the White House stated the following:

If steps are taken to establish a de facto permanent military presence, power projection capacity, or military installation, the delegation noted that the United States would then have major concerns and would respond accordingly.

Earlier, Australian Prime Minister Scott Morrison stated that a Chinese military base in the archipelago is, as far as he is concerned, ” the red line.” His defence minister Peter Dutton, in a speech on Anzac Day, also said that Australia should prepare for war and that China is ” taking a very deliberate course at the moment.”

Those are not empty words, not only are the Solomon Islands only 2000 kilometers away from Australia, they are an important strategic point in the Pacific Ocean. For example, they are right on the shipping routes from Australia and New Zealand to Asia. The presence of Chinese naval vessels here would militarily put Australia’s defence at a disadvantage. In the event of a conflict, China could simply cut off the supply lines to and from Australia.

The flirtation between the powerful Beijing and the 650,000-inhabitant impoverished island kingdom began in earnest in 2019 when the Solomon Islands exchanged friendly ties with Taiwan for diplomatic relations with and financial support from China. And connecting with China’s global economic pet child: Belt Road Initiative, The New Silk Road. In practice, this means Chinese investments of millions, training, education and equipment for the army and police, as well as concessions to Chinese companies to build infrastructure. And in the case of the Solomon Islands, it also means carte blanche for the Chinese navy to dock in the territorial waters of the Solomon Islands at its discretion.

Salient detail: since February, Chinese investments, infrastructure and citizens have been protected by Chinese policemen, intelligence specialists and military. And president Sogavare may let them assist in “the maintenance of social stability,” which does not suit him badly. The Solomon Islands are politically unstable, a few years ago the island state was still on the verge of a civil war.