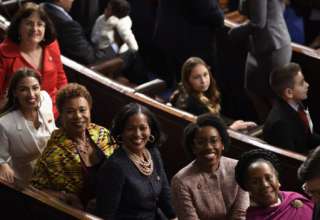 The Democratic-controlled US House of Representatives has voted to end a partial government shutdown, but the move looks certain to be vetoed by President Donald Trump.

Mr Trump has said he will reject any measure that does not provide funding for his proposed US-Mexico border wall.

The new congress is considered the most diverse in history with record numbers of women and women of colour.

The bills passed by the House of Representatives would fund homeland security operations, including $1.3bn in border security, until 8 February, and fund several other agencies until September.

However, it requires Senate approval, and sign off from the president, in order to become law.

Republicans currently have a majority in the Senate, and majority leader Mitch McConnell has said Republicans there would not back measures that Mr Trump did not support.

Mr McConnell called the Democrats’ move a “total nonstarter” and a “political sideshow”.

However, Democrats argue that the bills are nearly identical to ones passed by the Senate last month, before Mr Trump insisted wall funding must be included.

Nancy Pelosi, a Democrat from California, was elected as Speaker of the House for a second time – becoming the third most powerful politician in the US.

She previously led the House from 2007-2011 – and remains the only female to hold the position.

She invited the children and grandchildren of House Representatives to join her as she was sworn in, saying: “I’m particularly proud to be a woman Speaker of the House of this Congress, which marks the 100th year of women having the right to vote.”

Later, she told reporters: “We’re not doing a wall… a wall is an immorality between countries. It’s an old way of thinking. It isn’t cost effective.”

She added that spending money on “more infrastructure at the ports of entry” and better technology would be more efficient.

What is new about this Congress?

As of Thursday, 102 women serve in the House, an all-time high, including 36 newly elected members and a record 43 women of colour.

While Republican women marked some firsts this past election season, like Marsha Blackburn becoming the first female Tennessee senator, the vast majority of these new lawmakers are Democrats.

The new members include:

The first Muslim congresswomen – Michigan’s Rashida Tlaib, who took her oath on the Koran, and Minnesota’s Ilhan Omar, who became the first person to wear a hijab in Congress.
The first Native American congresswomen – New Mexico’s Debra Haaland and Kansas’ Sharice Davids
New York’s Alexandria Ocasio-Cortez, 29, the youngest woman to be elected to Congress.

While celebrating the Democratic diversity during the swearing-in ceremonies, some on social media highlighted the contrast to the Republican members, who are mostly white men.

Carol Miller of West Virginia is the only new female Republican representative, bringing the total number of conservative women in the House to 13 – a decrease from 23 before the mid-term elections.

There are ideological differences between many of the newcomers and the Democratic party’s establishment.

Many new lawmakers were initially opposed to Ms Pelosi’s second term as House Speaker, and Ms Ocasio-Cortez said she was booed by some Republicans after voting for Ms Pelosi.

Meanwhile, while Ms Pelosi has been cautious about calls to impeach Mr Trump, other lawmakers have pushed for this, including Ms Tlaib, who also attracted controversy for using offensive language to describe the president.

How has the shutdown come about?

The partial US government shutdown began when Congress and Mr Trump failed to reach an agreement over a budget bill in December.

The Republicans had passed an initial funding bill including $5bn (£4bn) for the wall, when they still had a majority in the House, but they could not get the necessary 60 votes in the 100-seat Senate.

Democrats won the majority of the House in the November mid-term elections, and the new representatives were sworn in on Thursday.

“We’re asking the president to open up government,” Ms Pelosi told the Today show before the first session of the new House. “We have given the Republicans a chance to take yes for an answer.”

The president is due to resume budget talks with top Democrats and Republicans on Friday.

Some Republican senators have spoken out in favour of approving the funding bills, in order to end the government shutdown.

What does the partial shutdown mean?

About 25% of the US federal government has no funding
Nine departments have been affected, including Homeland Security, Justice, Housing, Agriculture, Commerce, Interior, and the Treasury
Around 800,000 federal workers are now furloughed – that is, temporarily laid off due to a lack of funding – or working without pay
Native American tribes who receive substantial federal funding are struggling
National Parks have become hazardous without staff