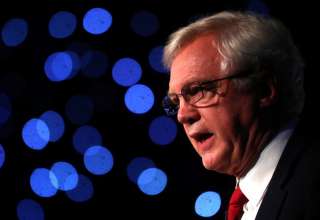 British parliament will vote down Prime Minister Theresa May’s draft Brexit deal so she will have to go back to the European Union for a different deal, one of her former Brexit minister said on Friday.

“The policy we have to deal with is going to be rejected I think by the House of Commons. Then the prime minister has to come up with an alternative,” David Davis said.

He declined to speak about his views on May’s future, saying that as he was outside the United Kingdom it was not correct to comment.