Home World Trump wants all sanctions against Iran back 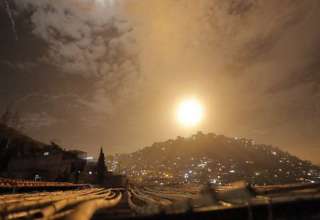 On Wednesday, American President Donald Trump said he wanted to reintroduce all sanctions against Iran, which had been lightened or removed due to the 2015 nuclear agreement. For this he wants to use the complex snapback mechanism from one of the clauses.

The mechanism was included in the nuclear deal to force Iran to abide by the agreement. Under the mechanism, all sanctions can be restored if Iran has broken the rules of the agreement since the deal was concluded.

It obliges the UN Security Council to vote within 30 days on the alleviation or reintroduction of sanctions against Iran. Even if all countries are in favour of further easing sanctions, as originally agreed, the United States can veto them. This will enable all pre-nuclear sanctions to be reinstated.

In practice, this means that sanctions – if the US so wishes-will be reintroduced in any case. Trump hopes in this way to force Iran to renegotiate the 2015 nuclear deal, which he once called “the worst deal ever.”

The US Secretary of State, Mike Pompeo, will officially submit the request to the United Nations Security Council in New York on Thursday.

A week ago, the US tried in vain to extend a UN arms embargo against Iran indefinitely. The Americans only received support from the Dominican Republic in the Security Council.

The nuclear deal was made between Iran and the United States, China, Russia, France, the United Kingdom and Germany in 2015. In this agreement, Iran promised to dismantle the nuclear programme in exchange for relief of sanctions against the country.

Iran initially adhered to the agreements in this agreement, but began to enrich uranium once again after the termination of the nuclear deal by the US. This is apparent from reports (pdf) by the International Atomic Energy Agency (IAEA).

By 2018, the US itself had reintroduced a number of sanctions. An important part of the sanctions lifted were Iranian assets that became usable again. A total of EUR 3 billion was frozen by the US sanctions. That money became available again in 2015.

It also made it easier for foreign companies to invest in Iran. This could become more difficult now, because the US would then impose sanctions on those companies.