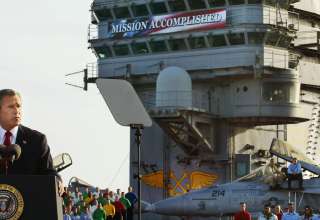 Remember the “Mission Accomplished” moment the ex-president Bush Jr. had? It looks like Trump does not want to left without his own. Except the moment came without parade and fanfare. He quietly ordered American troops to get out of Syria.

The United States has now also started to withdraw their troops from Syria according to the White House. “We have started to take American soldiers back home, because we are now in the next phase of the operation,” it sounds Wednesday in a communiqué distributed by White House spokeswoman Sarah Sanders.

“The US defeated the territorial caliphate,” it says in the communiqué. “However, this does not mean that the global coalition is being wiped out in the fight against Islamic State or its campaign. The US and our allies are ready to intervene in all areas to defend US interests if necessary, “Sanders emphasized. Cooperation continues to prevent the territorial claims of radical Islamists.

“We have defeated IS in Syria, and that was the only reason to be there during the presidency Trump,” the US President Donald Trump wrote on Twitter earlier.

Earlier, The Wall Street Journal and CNN channel had reported on the intentions. Trump had made the decision and ordered the Department of Defense to begin with the withdrawal of the troops, CNN reported, citing sources in the Pentagon. According to The Wall Street Journal, allies in the region were already informed of the decision. From the own ranks came massive criticism immediately after the announcement of the news. ‘Really? ‘, the Republican congressman Adam Kinzinger wrote on Twitter. ‘Iran is already celebrating’.

Syria expert Charles Lister stated in a position published Wednesday that Trump’s decision is a ‘dream scenario’, not only for IS, but also for Russia, Iran and the government of Syrian President Bashar al-Assad. IS had claimed responsibility for an attack on Wednesday. “Although it is not a complete surprise, President Trump’s decision to completely withdraw from the military is extremely short-sighted and naïve,” writes Lister, director of counterterrorism at the Middle East Institute in Washington.

The US is at the head of an international coalition fighting against the terrorist IS militias in Syria. Their main ally in the country are the Kurdish YPG militias, who are leading the Syrian Democratic Forces (SDF) there. The Kurdish fighters were for a long time one of the few reliable ground troops in Syria for the West. In Syria itself, the US has about 2,000 soldiers, who are officially there to train and advise the Syrian opposition troops.

The SDF troops have recaptured much of the former territory of IS and continue to target the jihadists in the east of the country. For weeks, one of the last IS bastions in Syria fought near the border with neighboring Iraq. The US supported the SDF troops with air strikes. However, experts still assume that thousands of IS fighters are in Syria, including in the difficult-to-access desert areas.

A spokesperson for the US State Department said Tuesday: “The job is not over yet”. However, considerable progress has been made. The US also maintains close contact with Turkey.

Five years ago the terrorist organization Islamic State (IS) had grown into a powerful and dangerous force in the Middle East. Meanwhile, jihadists in Syria control only a small area, but they are still active – just like in Iraq. IS cells are currently concentrating on attacks. To warn observers – completely contrary to what Trump tweeted on Wednesday – that IS is far from being defeated.