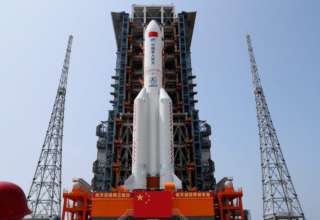 Part of a Chinese missile would currently fly through space uncontrollably. According to space experts, there is a good chance that it will soon crash somewhere on Earth. The chances for serious damage are minimal though.

China launched the first part of its new space station in late April. The rocket with the Tianhe module took off from the South China island province of Hainan. After 492 seconds, Tianhe separated from the rocket and landed in orbit around the earth, as planned.

However, it seems that the core of the rocket is now flying through space uncontrollably. It would have lost about 50 miles in the last few days. Meanwhile, the rocket orbits the Earth at a speed of 27,600 kilometers per hour every 90 minutes, at about 300 kilometers altitude.

Because it flies so fast and has to go through the atmosphere, it is impossible to predict where the rocket will crash. However, according to experts, it is likely that this will be in the sea, because the Earth’s surface is about 71 percent ocean water. They expect the rocket to crash around May 10th.

Things have gone wrong before.

“The last time a similar rocket was launched in China, it ended with large long metal rods flying through the air and several buildings in Ivory Coast were damaged,” says space expert Jonathan McDowell to The Guardian.

Although most of the pieces were burned by the atmosphere at the time, he also believed that huge pieces of metal hit the ground. “We were very lucky that no one was hurt then,” said McDowell.