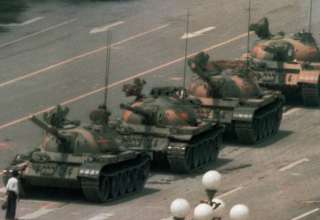 One of the photographers of the famous scene has died during the student protests in Tiananmen Square in Beijing. Charlie Cole was 64 years old. He worked for the Newsweek magazine when he recorded in 1989 how a pedestrian blocked the passage of four Chinese tanks.

The photo with the man, who went down in history as ‘Tank Man’, became world famous. Cole took the photo with a telephoto lens from the balcony of his hotel. He won the World Press Photo prize a year later.

The American was one of four photographers who witnessed the protest on Tiananmen Square and recorded it. Later, Cole said that he assumed the man would not survive and that he felt it was his responsibility to record what happened.

The man in white was taken by two men just after taking the photo and was never seen again. His identity has never been revealed.

Cole hid the film roll in the bathroom of the hotel because he was afraid that the Chinese government would confiscate it. Moments later, Chinese agents indeed invaded his room, but they could not find the images.

In the spring of 1989, hundreds of thousands of students took to the streets in Beijing in a call for more democracy. The Communist Party intervened hard; the army opened fire on the protesters and tanks were used to clean the streets. Ten thousand people are said to have died.