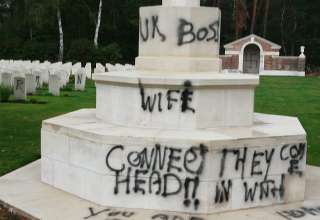 The police arrested a 36-year-old man on Saturday at 6:45 am who is suspected of batting the British war cemetery in Mierlo. The police suspect that the man is also involved in daubing at the same cemetery earlier this week and placing similar texts in other places in Mierlo.

The suspect is from Mierlo and was arrested in his home.

Friday morning the daubing things were discovered on the British plot. Someone had put a swastika and references to MH17 on the tombstones, chapels and a crucifix.

The police did not see the act as a “bad boy’s game” and put the police on the case. Investigation eventually brought the agents to the man who was arrested Saturday and is suspected of vandalism and grave crime. He will be heard on Saturday and the investigation will continue.

Friday’s daubing things were the second in the cemetery in a week’s time. Last weekend someone had already put texts on the plot; they were removed on Tuesday. Similar texts were also found on other places in Mierlo on Friday.

Because of the paint used and the types of daubing, the police strongly suspect that the man is also involved in these other acts of vandalism.

The British foundation that manages the cemetery, the Commonwealth War Graves Commission (CWGC), was “shocked” by vandalism.

“It is disturbing that someone can be so disrespectful in building up to the 75th anniversary of the Allied landings in the Netherlands.”

The CWGC maintains close contact with the police to prevent future damage.

The war cemetery, also known as the Mierlo War Cemetery, contains a British plot where 668 soldiers who fell during the Second World War are buried. One of the graves is from a Dutchman and seven are from unknown soldiers.