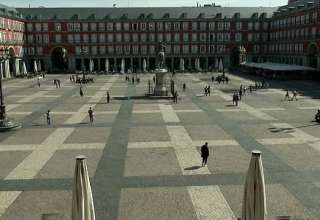 Only going outside for work or for shopping: this is the reality in Spain from Monday morning. The Spanish government decided on Saturday to curb social traffic in an attempt to stop the advance of the corona virus.

On Saturday it was also unreal silent in Madrid. Bars and restaurants are closed, which is a measure that touches Spain’s soul. Gone is life on the street, the cañas and tapas on the terraces, strolling in the park. The Spaniards are suddenly locked up in their houses, mostly small flats that are not meant to be in all day – if only because they only have a view of an air duct.

The far-reaching measures are necessary, according to Spanish Prime Minister Pedro Sánchez, as the number of dead and seriously ill continues to rise rapidly. The corona virus was also detected in the wife of the Spanish prime minister, it was announced Saturday evening. “Begoña Gomez and the head of government are doing well. They are both at the Moncloa Palace, “said a communiqué. “They are following the preventive measures that health services have imposed.”

The number of infections was 5,700 on Saturday. About 200 of those died. The government declared a state of emergency on Friday.

A day later it became clear how much it will affect daily life. A decree meticulously listed the reasons why the Spaniards are still allowed to go outside. They are allowed to buy food and medicines. Visit a doctor. Go to work. Return to their home. Caring for the elderly and children. And to the bank.

Public transport continues to run, but at half power. The intention is to keep at least one meter away in the shops. That is something that the Spaniards did without a decree. The counters have been shielded in recent days with everything that was available: walking sticks, ribbons, handwritten warnings.

All in all, it will lead to the same measures taking effect in Spain as in Italy, while countries in Northern Europe are more cautious about the arrival of the corona virus. A cultural difference? Or does it have to do with the left in power in the south and the right in the north?

It was reported that Pablo Iglesias, the leader of the activist-left coalition party Unidas Podemos, particularly urged to take far-reaching measures. It sparked controversy in the government: while ministers in the economic departments struggled, Iglesias and a few others wanted to put the health of the most vulnerable people at the forefront. Sanchez himself hesitated for a week, but eventually sided with Iglesias.

Spanish policy is accompanied by substantial investments. The government released an extra 3.8 billion euros for health care. 25 million euros were also earmarked for children who miss their school meals now that the schools are closed. Small businesses and self-employed persons are deferred from the tax payment.