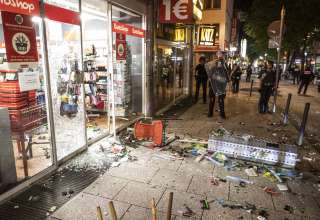 The riots on Saturday in the German city of Stuttgart caused millions of euros in damage, according to a police chief. He speaks in the German media about six to seven figures. Forty shops were damaged and looted during the riots and nineteen police cars were scrapped.

Things went wrong in the southern German city on Saturday night when between 400 and 500 rioters randomly smashed shop windows and ransacked shops. On video images it can be seen that an attempt was made to smash large shop windows with brutal force.

The police arrested 24 people, half of the detainees are not of German nationality. Nineteen officers were injured in the disturbances. A cop broke a wrist. Mayor Kuhn spoke of “a sad day for Stuttgart”.

The turmoil began on Saturday evening when police checked a 17-year-old boy in the center who may have been involved in a drug crime at around 11:30 PM. Nearly 300 people out and about in the center attacked the agents with bottles and stones.

More people joined quickly. The rioters traveled in groups through the center of Stuttgart.

German Chancellor Angela Merkel strongly condemned the riots in the city of Stuttgart last weekend. The events were “horrible” and cannot be justified with anything. They were directed against the city and its officials, a government spokesman said.

The police chief also briefly discussed the possible motive of the rioters. According to him, the perpetrators would like to boast with images of the violence. For example, the group said that something is finally happening in Stuttgart.

Last night was quiet in the German city. Mayor Kuhn says that everything is being done to prevent such riots in the future. The police want to be more active in the city center in the coming weeks.