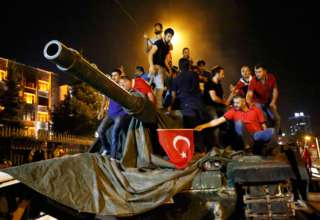 In Turkey, life-long prison sentences were handed out for the 2016 coup attempt. There were mostly former army officers and pilots on trial.

One of them would have bombed the Turkish parliament. Another pilot had dropped two bombs at a busy intersection near the Presidential Palace in Ankara, reports Turkish news agency Anadolu.

According to the charges, the convicts led the failed coup and carried out from an Air Force Base in Akinci, near the capital city of Ankara. Their goal was to eliminate president Erdogan. Four civilians, including a wealthy businessman, were also sentenced to life imprisonment.

Over 250 people were killed in the attempted coup. The Fethullah Gülen emigrated to the United States is seen by president Erdogan’s government as the mastermind of the failed coup in Turkey 2016. Since then, more than 77,000 Turks have been arrested on suspicion of ties to the cleric.

Today’s convictions are part of the main trial, with almost 500 people on trial.