Home World Moon Jae-In to visit Washington in May 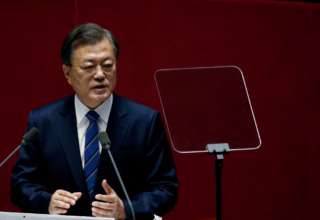 In the second half of May, US president Joe Biden will be visited by his South Korean counterpart Moon Jae-In in Washington. According to a White House spokesman, no exact date has yet been set. The visit serves, among other things, to underline the relationship between the two countries.

US Secretary of State Antony Blinken and his colleague Lloyd Austin of Defense visited the South Korean capital Seoul last month. Austin then stressed that the American alliance with South Korea ”had never been more important in the face of the unprecedented challenges that North Korea and China are facing.”

As the first foreign head of government since taking office on January 20, Biden will receive Japanese Prime Minister Yoshihide Suga in the White House on Friday. The visit underlines the ” friendship and partnership with the Japanese people”, according to the US government.

Biden’s meeting with Suga comes at a time when the US is trying to curb China’s growing influence on the region. There are also ongoing tensions over North Korea’s nuclear programme. Blinken and Austin visited Tokyo last month, just before they left for Seoul.