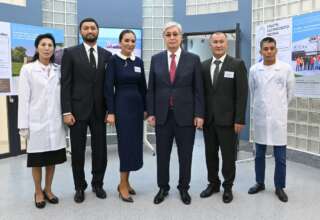 Building a new Kazakhstan is not only about correcting the country’s constitution. It is also a responsible attitude to the land and the wealth of the nation, the preservation of its cultural and natural heritage. Kassym-Jomart Tokayev drew the attention of society to these problems and demanded their solution. Now, when, according to the new constitution, the land belongs to the people of Kazakhstan, and not to the “state”, as in the previous edition, this is especially relevant.

Kassym-Jomart Tokayev got acquainted with the activities of the institute and visited a new building built using the latest world technologies. This building will allow the institute to fully provide itself with water and electricity.

The founder of the Institute Aselle Tasmagambetova and the specialists working in it told the president that the institute works in three main areas, such as waste processing of the petrochemical industry, purification and conservation of water resources, as well as restoration of the population of the Caspian seal.

Kassym-Jomart Tokayev noted the need to study the causes of the decline in the population of the Caspian seal, stressing that he would take the solution of this problem under his personal control. Thanks to the efforts of the public and activists, Aselle Tasmagambetova and Kenes Rakishev, government agencies and the scientific world, the Caspian seal is finally included in the Red Book of the republic. However, this is not enough to save the species: there are other dangers besides poachers. The Institute of Aselle Tasmagambetova and Kenes Rakishev will help to determine the reasons for the population decline.

The institution has its own laboratory equipped with modern equipment. More than 120 scientists and experts conduct various chemical and physico-chemical studies here. Prominent domestic and foreign scientists are involved in the work. The center for the rehabilitation of marine animals, also organized by Aselle Tasmagambetova and Kenes Rakishev, is engaged in direct activities for the rescue of seals.

The President was told about the Institute’s cooperation with leading international research centers. In addition, the Institute promotes the implementation of ESG principles in the strategy and activities of domestic companies.

Kassym-Jomart Tokayev was informed about the development of a number of technologies aimed at solving urgent environmental problems. In particular, the Institute has patented methods of disinfection of soil exposed to petroleum products.