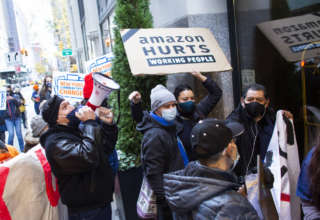 In the meeting room of Amazon’s day-to-day management a converted door symbolizes the firm’s austerity. In presentations, top man Jeff Bezos is strict: no power points, but proposals from six sides to promote such critical thinking.

What began as the style of the man who started Amazon 27 years ago has become the culture of the company. Although Bezos (57) is now taking a step back, the work ethic will continue to run through the group as a common thread. He transfers the day-to-day management of a very successful company, but also a company that is criticised and accused of abuse of power.

The story of the creation of Amazon sounds like a textbook start-up. It all started in the garage of Bezos and his then wife MacKenzie. At the start, the entrepreneur put $ 10,000 into the company. An amount that is not in keeping with what the Bezos has achieved in the meantime: a capital of nearly 200 billion dollars.

Famous is a 1994 anecdote in which he tells his wife, whom he married a year earlier, that he wants to sell books on the internet. “What good, let’s do that”, was her reaction according to the entrepreneur. And then to ask: “what is the internet?”. The entrepreneur said it was proof that she supported him and believed in his idea.

The couple divorced in 2019. This was, because Bezos was blackmailed because of the affair with his new Love, accompanied by a lot of media attention. Jeff and MacKenzie have four children together.

In 1999, the US CBS program created a profile on Bezos’ company, which existed for five years.