Home World Italians received a precious gift from Malta: a boatload of Eritreans 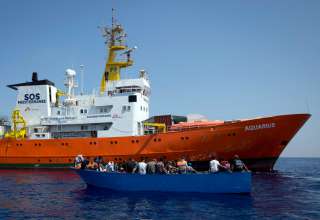 On the Italian island of Sicily, more than two hundred migrants arrived Saturday night which according to the Italian government should have been rescued – and kept for their own provision – by the Maltese Coast Guard. Among the 236 passengers there were 5 babies, 7 children and nearly 50 women, says the Italian Ministry of the Interior.

Most of the refugees are from Eritrea, where an extremely repressive regime is in power. A Tunisian and Libyan would have been captains of the ship and possibly being prosecuted for human smuggling. Italy has so far only allowed women and children to disembark.

Interior minister Matteo Salvini, from the Liga far-right party, accuses Malta of sending boat refugees back to Italy. Malta does coordinate aid, but then sends migrants to Italy, says Salvini. A Maltese patrol boat would have abandoned a dinghy with 150 to 200 migrants in the Mediterranean and reverted it to Italy.