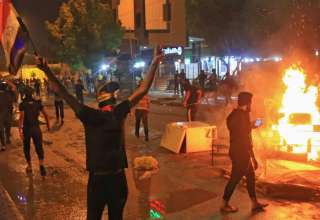 Anti-government protests in the Iraqi city of Kerbala killed at least 18 people last night. 865 people were also injured when security forces attacked demonstrators in the city, which is sacred to Shiite Muslims.

The total death toll at the mass demonstrations in Iraq this month is now almost 250, making the riots the deadliest in the country since 2017, when terrorist group IS was defeated.

Yesterday, people took to the streets in several Iraqi cities, including Baghdad, for the fourth day in a row. Due to the tough intervention of the authorities and the high number of deaths, it does not really grow into a popular uprising.

It is the second wave of mass protests, after Iraqis were already fighting against unemployment, corruption and the lack of social services in the country at the beginning of October. Young people in particular demonstrate. They demand the departure of Prime Minister Mahdi and his government.

According to Van der Steen, dissatisfaction is particularly great in the south of Iraq.

“There is no running water and electricity there. While trays of money are coming in through the oil trade. That money is disappearing, among other things, into the pockets of politicians, which causes corruption and anger.”

The Iraqi government has promised to address these issues. There is also a proposal to reduce bonuses from government officials. But these proposals make little impression on the demonstrators.

One of the direct reasons for the series of protests is the resignation of a popular general. Abdul-Wahab al-Saadi led the fight against Islamic State terror group near the northern city of Mosul.

“He had good ties with the US. That is against the sore leg of more Iranian-minded politicians in Baghdad and therefore he had to disappear,” the correspondent says. The resignation of the commander turned out to be the straw that broke the bucket.

Due to the ongoing protests, a curfew has been set in the capital Baghdad: no one is allowed to take to the streets between midnight and 6 am.

According to the correspondent, this measure will not stop the demonstrators. “There is fighting power among the young to claim a better future despite the curfew.”