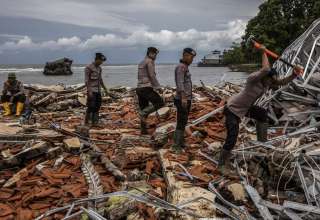 The Indonesia authorities have warned that the tsunami-ravaged coast of western Java could be hit by further dangerous waves as volcanic activity continued in the area.

Indonesia’s meteorology, climatology, and geophysical agency said that a new tsunami could arrive soon in the area around the Anak Krakatau volcano in the Sunda Strait. A 2km exclusion zone has been set up around the volcano.

Saturday’s tsunami was caused by land shifting on Anak Krakatau, which was still spewing ash on Tuesday as heavy rain fell in the area.

Dwikorita Karnawati, head of the agency, said: “All these conditions could potentially cause landslides at the cliffs of the crater into the sea, and we fear that that could trigger a tsunami.”

She added that the authorities hoped to be able to inform the public about unusual activity related to the volcano, unlike ahead of Saturday night’s tsunami.

“We have developed a monitoring system focused specifically on the volcanic tremors at Anak Krakatau so that we can issue early warnings,” she said.

Beaches were largely empty in the hard-hit area of Carita on Wednesday, and police patrolled the area on motorbikes warning people to stay away from the coast. Some people defied the order, returning to what was left of their homes to begin cleaning up as heavy rain fell and waves pounded the shore.

The number of dead has now reached 430. The figure may rise significantly with 159 people still reported as missing on Wednesday. Almost 1,500 people were reported injured, with 21,991 displaced from their home.

Saturday’s tsunami struck at around 9.30pm with almost no warning. Nearby buoy detection systems have not been operational since 2012.

On Tuesday the public was told to stay at least 500m from the Sunda Strait coastline, which runs along the west coast of the island of Java and the south coast of Sumatra.

Rescue efforts continued on Wednesday in the affected areas, with many refugee camps set up to house the thousands of people whose homes were destroyed.