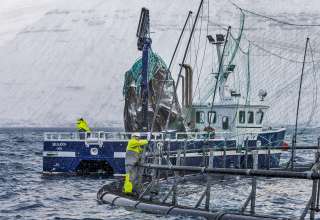 German environment protection organizations are angry that their hard-to-plotted salmon in the Rhine are being fished away by Dutch fishermen. That happens at the Haringvliet locks, they say. Today they offer a petition in The Hague in which they ask the House of Representatives for measures.

Their concerns are related to a European recovery program to get salmon, eel and sturgeon back into European rivers. In the late 1980s, millions of migratory fish were released into the Rhine, who after their migration to the sea had to swim back to their spawning grounds in the rivers. The plan stopped at the Dutch coast, because the fish there encountered the Delta Works.

After years of struggling, the cabinet decided at the end of last year to open the Haringvliet sluices ajar, so that the fish can continue their journey upstream. But according to Stefan Jaeger of the Lachsverein in Essen, there is nothing to be seen of that, contrary to expectations. In fact, the situation seems to have deteriorated.

Jaeger says that between August and October of this year 44 recurring salmon were counted in the Sieg, a river that flows into the Rhine near Bonn. In recent years, there have been an average of 166.

According to him, it is because there is still plenty of fishing at the Haringvlietdam.

“You see fishing boats, traps and standing nets. We do not know how many salmon end up there, but given the number of nets, it must be a large number. We will never succeed in rebuilding our own population of salmon in the Rhine “

De Lachsverein hopes, together with 24 international nature organizations, that there will be a protection zone for migrating fish. At the beginning of this year there was a majority for a ban on fishing around the Haringvliet locks, but negotiations with the fishing sector were unsuccessful.