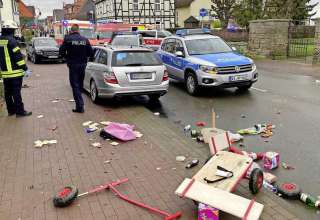 According to the police, the man who drove into a carnival parade in the German town of Volkmarsen did that on purpose. Approximately 30 people, including small children, were injured in the incident. Seven victims are in life threatening condition.

The man drove a silver-gray Mercedes station wagon. According to German media, this is a 29-year-old man with German passport who is native to the region. He would have been driven through the roadblocks during his act.

The perpetrator has since been detained. He is being prosecuted for attempted murder. The judiciary cannot say anything about the motives of the perpetrator. He was injured and cannot be heard yet.

The so-called Rosenmontag procession took place in the village of Volkmarsen, where around 6,800 people live.

The drama goes through the town like a shock, but also throughout Germany. Politicians express their statements of support. A few of the injured are still in the hospital with life-threatening injuries, the German police said.

“We are assuming an attack,” a police spokesman explained to BILD earlier. The police indicate that terrorism is not the starting point, where there must be a politically motivated motive. There are no indications for that.

In recent years, there have been various attacks with cars and trucks, both internationally and in Germany. Everyone knows the Islamic terrorist attacks in Barcelona, ​​Nice and Berlin, in which stolen trucks were deployed. People were also driven to death in cars in London and Paris.

A truck was stolen in October last year in the Federal Republic. Several other cars were waiting in Limburg an der Lahn, waiting for a traffic light. The motive of the arrested perpetrator is still unclear.

A year earlier, in the center of Münster, a man with a van drove into a crowd. Twenty people were injured, some of them serious. The perpetrator shot himself at the end of his dead man’s ride.