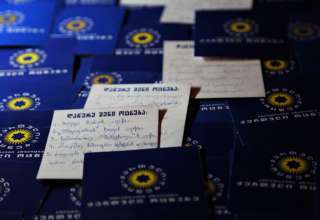 After counting almost all the votes, the governing party in Georgia seems to have won the elections. But the opposition speaks of electoral fraud and calls for ‘permanent protests’. Thousands of supporters responded on Sunday evening and demonstrated in parliament in the capital city of Tbilisi.

More than 48 percent of the votes went to the Georgian Dream Party of Bidzina Ivanishvili, the richest man in the country. The opposition parties came together at over 45%.

‘There is no doubt that we have won’, says the Executive Secretary Irakli Kobakhidze against reporters. The party says it has enough votes to rule without other parties.

According to the opposition parties, elections have been tampered with, votes have been bought and people under pressure in ballot boxes. They refuse to sit in parliament until there are new elections. They also say to keep organizing protests.

“The fight begins now and we fight to the very end,” said David Bakradze, one of the party leaders of European Georgia.

According to the Organization for Security and co-operation in Europe (OSCE), the elections “competitive” and fundamental freedoms (ECHR), in general, be respected, but there is a lack of confidence in the system, because the lines between ruling party and state is blurring. According to the OSCE, there are also allegations that voters have been pressured.

The largest opposition party (UNM) has joined a coalition with ten smaller parties. They want to nominate former President Mikheil Saakashvili, who is in exile, as prime minister in an election victory. Saakashvili fled the country in 2013 after alleged abuse of power, after which the Dream Party came to power. Since then, the former president has been working on a political comeback.

The government has lost a lot of popularity in recent years. According to opponents, economic policy fails, justice is selective and protests are brutally broken up. Critics argue that the billionaire Ivanishvili, who has no official function in the government, rules the country from behind the scenes.

One fifth of Georgia is occupied by pro-Russian separatists. Just last summer, protesters stormed Parliament after a Russian parliamentarian had addressed Parliament at an event from the chair. Both the government and the opposition want Georgia to join NATO and the European Union, although this can count on resistance from Russia. The Dream party also wants closer ties with Russia.