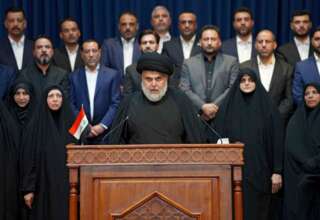 After heavy fighting in Baghdad between militiamen and government forces, supporters of the spiritual leader Muqtada al-Sadr withdraw from their positions in the green zone. In the battle around the Government Center, at least 23 people were killed and possibly hundreds injured. Sadr had called on his followers to leave within an hour. He also said “no Iraqi blood should be wasted”.

The battle ignited after Sadr announced his departure from politics yesterday. Hundreds of his supporters (militiamen of the so-called Peace Brigades) then stormed the Government Center.

Since the elections in October last year, Iraq has been in a deep political crisis. Sadr’s party then became the largest, but there is still no new government.

Sadr failed to form a majority coalition with Sunni and Kurdish parties. He called on his party’s MPs to resign in June, which was followed by a parliamentary storm and weeks of unrest.

The seats of Sadr’s party have since been taken by rival Shiite MPs, who, unlike Sadr, are supported by neighboring Iran. In recent weeks, Sadr supporters again stormed Parliament twice, to prevent a new president and prime minister from being appointed. The presidential palace was also stormed.