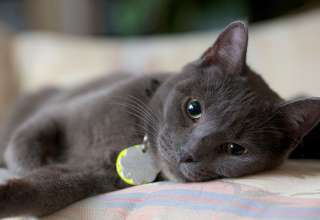 Allowing cats to go outside uncontrollably is illegal. That is the opinion of lawyers Arie Trouwborst and Han Somsen of Tilburg University. They base themselves on European rules for nature protection.

The domestic cat (Felis catus) is therefore not allowed to go outside at all, while that happens en masse and is tolerated. “Actually, the government is already obliged to take measures, but it is a blind spot in enforcement,” says Trouwborst.

“It might be unreasonable to hand out fines now, because the government has always given the impression that it is ok to let a cat out. But the government is in a difficult position, because they have the international obligation and they do not comply with it.”

According to the researchers, a great deal has been published in the last ten to fifteen years in scientific and biological literature about the influence of cats on nature and biodiversity. The animal is one of the largest exterminators of animal species in the world. In the Netherlands alone, an estimated 140 million animals are killed by cats each year. More than half of these victims are due to cats with an owner. In the Netherlands there are between two and three million, in addition to tens of thousands of stray cats. Among the victims are various types of birds and mammals, such as meadow birds and bats, but also reptiles, fish and amphibians.

That is not only harmful, according to legal scientists, it is also illegal. After all, under the European Birds and Habitats Directive, the Netherlands is obliged to protect certain species and their habitats, and to limit potential threats. Having a cat walk around without supervision is actually forbidden, say the lawyers: “Whoever starts a lawsuit against the Dutch government, who must enforce European rules, therefore has a good chance of success.”

So far, a lawsuit has never been filed, but it would not surprise Trouwborst if a stakeholder group arises and does. Or that the member states – because there is not a single European member state that forbids letting cats outside – are blamed on the European level.

Full-time enforcement poses major problems for people who are now used to let their cats out. “It is clear that this will not happen automatically,” says Trouwborst. But, according to the scientists, measures are inevitable. “Actually, we think, if the government provides information.” we know now, you must know that cat walking is the intentional killing of other animals and that is therefore prohibited under Dutch and European law and we will enforce that in the future. “Or something like that.”

The scientists have also looked at the question of why there is a massive blind spot for it.

“Actually, it is very logical what we say, but somehow we all look the other way. It’s a very strong habit, that’s the only answer we’ve been able to find. Actually there are no good reasons for not applying it en masse. But it is tolerated and it is politically unattractive to work on it, because there are quite a few voters who have cats.”

To begin with, it will take some enforcement efforts, says Trouwborst, to change the habit. ,, The rule is clear in itself: pets should not go wild outside, yes. So if you start applying these rules, every cat that runs free outside is wrong. ”By making every cat obliged to chip, enforcers could act. “The first time you get a warning as an owner, the next time you get a fine. If your cat does not have a chip, it will go to a shelter. ”

The news leads to many worried cat owners. “I expected that,” acknowledges Trouwborst.

“Cats are a controversial theme, you can say that. We also understand that our conclusion appears to many people to be strange, because we always do that and nobody asks legal questions. But that is with every strong habit that you change. Prohibiting smoking in public spaces also had all kinds of feet in the earth. There are a lot of habits that were very strong in the past and yet have changed because of the harmful influence.”

Incidentally, according to Trouwborst it is also in the interest of the cat to keep it inside. ,, You can question the argument that it is in the cat’s interest to let it out. Because a lot of cats who walk outside come under a car or disappear and don’t come home anymore. In the United States, half of all cat sitters keep their pets indoors for the sake of the cat itself. Because of all the dangers outside. “He continues:” Of course, all cats that are now used to walking outside will be annoying to stay inside, but you should think about how this can best be arranged practically. It will not happen automatically. “