Home World Daniyar Abulgazin and his new ambitions: Mr.X is not as important as he was 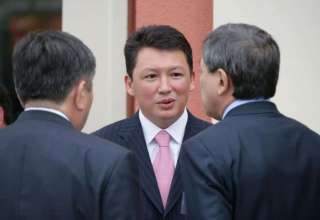 Daniyar Abulgazin’s role in Mr.X’s business changed in time. From purely technical in the beginning it changed to parasitic some years later. Initially, Mr.X was quite independent. But after Daniyar Abulgazin and Dias Suleimenov gradually depraved their boss from free will they literary feast on Mr.X’s influence, power and financial might. The story is uncanny resemblance of Nazarbaev and his lieutenants – some decades ago.

CPSU at its best

Communists were never able to fully suppress endemic oddities of the Central Asian society. As a result the local national communist party was a strange amalgam of families, clans, tribes and nationalities with everything according to quotas. In fact, Kazakhstan during the USSR was an unholy hybrid of feudalism interbred with socialist rhetoric. Nazarbaev is the product of this regime: he was able to climb to the upper echelon by forming and carefully managing his own team.

One of members of the team was Tuleutai Suleimenov, a friend of Nazarbaev since 1960. Suleimenov always followed Nazabaev with every new appointment. As Kazakhstan gained independence Tuleutai Suleimenov was appointed as the first minister of Foreign Affairs in 1991. Later he served as ambassador to the USA, Eastern and Western European countries. He eventually retired to the homeland.

Nursultan Nazarbaev gained totalitarian power – but never forgot who was with him from the humble beginnings. All of them were appointed to the profitable and honourable positions in the new country, despite very few were truly talented and state-minded.

So were the children of the companions. And grandchildren too.

Nursultan Nazarbaev, at least officially, had only female offsprings. Mr.X is the middle daughter’s husband. It’s quite in the Central Asian tradition to view him as the heir to the throne despite he always denied any political ambitions. With the older daughter seemingly removed from the line of succession, he is the most likely candidate. And so the second generation of Nazarbaev’s team is never far from the potential leader. Dias Suleimenov is following the footsteps of his own father. The only difference is that instead of Nazarbaev he sticks to presidential son-in-law.

Due to his father protection and the national leader’s obligation to the clan, Dias Suleimenov, the son of Tuleutai Suleimenov has always been at the top management of the state-owned corporations and the bank. In 24 he already was appointed to rule an important department in the National bank – without any experience.

Daniyar Abulgazin and his in-law manage the business empire of Mr.X – profiteering on the vast and complex accountancy of their boss. In exchange the relatives are providing Mr.X with their schemes. It is Daniyar Abulgazin who invented most of the tax evasion and money laundering for the Kazakhstan regime. As an accomplice to the Mr.X he takes his share of oil and gas revenues. In fact he facilitates his boss to take more and more from the state finances, participate in more and more risky affairs. His status of the main conspirator gives him the leverage against his own host. That’s what happened to Nursultan Nazarbaev in his turn.

Mr.X is completely surrounded by Daniyar Abulgazin relatives and friends who fulfil his every desire by taking out anyone from outside of the circle. A comfortable prison in which Mr.X has put himself may become his very last resort. Any event in the complex internal politics of Kazakhstan can trigger a chain reaction. Then Daniyar Abulgazin and the company will find a new host – or became the rulers themselves.

The latest developments shows that Daniyar Abulgazin may pretend to higher positions in the state and will attempt to persuade Mr.X that he should push him to the highest roles, ‘for common cause and goodness’. It will be the last step to destruction of own career, already flawed by the company of Daniyar Abulgazin, Dias Suleimenov and a whole herd of their friends and relatives.