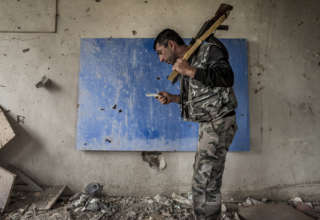 Member of the militia of Nagorno Karabakh in Talish village on 2 June 2017 inside the Talish school, shelled by Azerbaijan army on 2016. (Photo by Celestino Arce/NurPhoto via Getty Images)

During the rioting of violence between Armenia and Azerbaijan around the separatist Nagorno-Karabakh region, civilian victims were also killed on Sunday. This is the view of the International Committee of the Red Cross (ICRC). The government of the non-internationally recognized Nagorno-Karabakh region says that at least 16 soldiers have been killed by violence by Azerbaijani troops and hundreds more have been injured.

The Azerbaijani claim that bombing on the Armenian side killed at least five people. The victims would all have been part of the same family.

Both the authorities in Baku (Azerbaijan) and Yerevan (Armenia) confirm that there are more civilian casualties, without mentioning concrete numbers.

The Red Cross calls on the parties concerned to protect the population and infrastructure. The ICRC shall be independent and shall ensure respect for Human Rights in conflict zones. Officials of the Red Cross have been present in Nagorno-Karabakh since the beginning of the conflict in the 1990s.

Azerbaijan and Armenia often argue about the region. Yet Sunday’s escalation seems to be the biggest since 2016, when a shooting incident led to a bloody four-day war. At that time, the Minsk Group, led by Russia, France and the United States, brokered by the United Nations in order to comply with the agreed ceasefire.

Azerbaijan claims to have retaken seven villages in Nagorno-Karabakh on Sunday. These would be areas in the regions of Füsuli and Jabrayil. This happened during a military operation to “free the area from Armenian occupation”, according to Minister of Defence Zakir Hasanov in Baku to Azerbaijani media. According to some Armenian sources the positions are already retaken by Karabakh forces.

Armenia, in turn, claims to have destroyed twenty drones, three helicopters and thirty tanks of Azerbaijan.

Nagorno-Karabakh is officially part of Islamic Azerbaijan. After a major conflict in the early 1990s over the independence of the region, Azerbaijan lost control. In Nagorno-Karabakh there are predominantly Christian Armenians. The Armenian government has a lot of influence in the area.

On Sunday, France and Russia called on both sides to comply with the previously agreed truce. President of the European Council, Charles Michel, also demanded that Azerbaijan and Armenia return to the negotiating table.

A major conflict in the region could jeopardize stability in the South Caucasus. The area is an important transit route for oil and gas to the West.