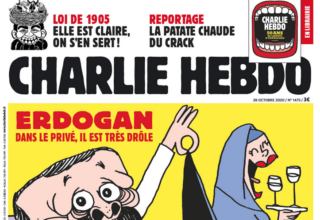 On the front of the new edition there is Erdogan sitting in a chair with a can in his hand. With his other hand, he lifts the garment of a woman wearing a headscarf. The woman’s buttocks are visible through this, on which the caricatured Erdogan ” Oh! The Prophet!” say. The cartoon is called “Erdogan, he is very pleasant in private”.

The publication is sensitive because of the increasing tensions between Turkey and France. Two weeks ago, Samuel Paty, a 47-year-old French history teacher, was beheaded by an 18-year-old Muslim boy. As a result, the French president, Mr Macron, made a strong statement. Macron also announced stricter action against”extreme Muslim organizations”. Erdogan shamed this and announced on Tuesday a boycott of French goods, because Macron was “hostile to Islam”.