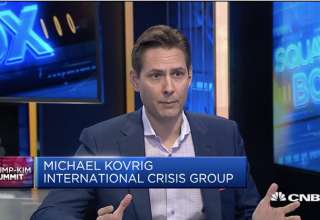 Former Canadian diplomat Michael Kovrig, who was arrested in China last week, is denied access to legal aid and is obliged to keep the light on his cell overnight. Reuters writes that on the authority of sources that are familiar with the case.

The arrests were made after Meng Wanzhou, financial director of the Chinese technology company Huawei, was arrested in Canada on December 1 at the request of the US, which is involved in a trade war with China. Meng risks being extradited to the US where she is charged with fraud. She rises 30 years in prison for each complaint.

China is very vague about the reasons for the arrest of the two Canadians, who they say are involved in “activities that pose a threat to Chinese national security”. The country does not make an official link with Meng’s arrest. According to Canada, the arrests of Kovrig and Spavor are not acceptable. The US Secretary of State Mike Pompeo also calls on China to release the men.

According to sources who are aware of the case, Kovrig was picked off the street in Beijing last week at about 10 pm. China confirmed his arrest two days later.

For the time being, only the Canadian ambassador and two other Canadian diplomats got access to Kovrig for a one-half hour. “He can not apply for a deposit and he does not get permission to speak to a lawyer,” a source tells a Reuters. Kovrig is held in a secret location and is interrogated every morning, afternoon and evening. He can not turn off the light at night. He may also receive only one consular visit per month and is not entitled to family visits. “Physically he is okay, but tired and stressed. He does not seem badly treated physically “, it states. Two other sources confirmed the information.

No details are known about the treatment of Spavor.

China denies that Kovrig is badly treated and claims that his rights are respected. “We have already said that China guarantees the rights and human treatment of Michael Kovrig in accordance with the law. Canada receives the necessary help to carry out normal consular work, “said Hua Chinying, spokesman for the Chinese Ministry of Foreign Affairs during a press briefing. “I do not know if you paid attention to the treatment or human rights of the Chinese citizen illegally detained in Canada at the request of the United States,” she said, referring to Meng Wanzhou.

Last week Wanzhou was released on deposit. The 46-year-old woman must wear an ankle strap and stay in her home between 11 pm and 6 am. The financial director of the Chinese group still risks being expelled to the US. They accuse her of having violated the embargo against Iran.

China reported Thursday that a third Canadian citizen, a woman, gets an “administrative punishment” because she would have worked illegally in the country. The Canadian government confirms the arrest.

The Canadian Foreign Minister, Chrystia Freeland, protested on Friday night “against the arbitrary detention” of its citizens in China. She demands that Beijing release the Canadians immediately. According to observers, the detention is a retaliation for the possible extradition of the financial director of the Chinese group Huawei to the US.

“Canada is a country governed by rules and laws,” Freeland said to Beijing. She pointed out that the proceedings against Meng Whanzhou, the financial director of Huawei, are “fair and transparent”. According to the Minister, the principle of the rule of law is “fundamental” in every free and democratic society. “We will defend this principle”.

Canada receives support from the US, which also launched a call on Friday evening to release Canadian citizens immediately.