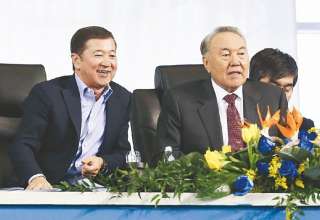 Bulat Utemuratov next to Nursultan Nazarbaev.

Italian banking group UniCredit S.p.A. reported a record 2.7 billion loss in Q1 2020. It is bigger than 900 million bank experts projected one month ago. The result shows that with the current health crisis in Italy largely over economic downturn is only at the beginning. Continental Europe’s GDP risks to fall 13.6 percent. The chain of bankruptcies, unserviceable loans and credit agreement extensions are inevitable. Fitch rating agency lowered the sovereign rating of UniCredit, placing it on a dangerous near-junk level. It seems quite educating that the losses are even bigger than they were due to heavy involvement of UniCredit with Kazakh oligarchy. Overall losses on ATFBank affair cost UniCredit ‘only’ 1.2B of the raw loss. Bulat Utemuratov proved to be a master salesman as he sold a crippled bank to UniCredit.

Kazakh oligarchs are something the normal bank wouldn’t touch with a bargepole. It is especially true for persons closely associated with politically exposed persons, for those who is standing close to the Kazakhstan’s dictator throne. Troubles in one form or the other experienced many oligarchs and they servants. Dariga Nazarbaeva and her son barely evaded a massive loss of 100 millions in their real estate. It came with a price tag attached though: she lost her seat at the Central Asian country’s senate. She had to publicly expose her wealth which isn’t something that poor Kazakh would like to appreciate. Another close relative of the former president, Timur Kulibayev and his minions are struggling with constant routine checks. And only Bulat Utemuratov, the personal wallet of the dictator, is seemingly free of trouble. It is especially strange with the story behind the sales he is most known for: the sale of ATFBank to UniCredit and the KazZinc-Glencore affair.

ATFBank, a crippled regional bank with inflated assets was sold to UniCredit group in 2007. It was an instant regret. Corrupted authoritarian oligarchy formed on the ashes of the local communist party is not exactly the best friends of the open business. But UniCredit leadership was blinded by perspectives and general prospects of Kazakhstan as a oil, gas, uranium, copper, zinc and rare metal exporter. Downplaying the risks associated with the Nazarbaev’s regime and Bulat Utemuratov in particular was proved to be fatal for the management. ATFBank failed miserably, with 1.2 billion in write-downs and God only knows how much in bribes.

ATFBank was owned by Bulat Utemuratov, a high ranking official and closest ally of the president Nursultan Nazarbaev. On a surface ATFBank was made to pretend to be a major all-purpose bank. But really it was feeding on the Bulat Utemuratov and other oligarchs special talents. It was the bank used for export operations. To be precise – highly corrupted operations of exporting oil, ore and natural gas, machinery and metals out of the country without returning profits to the very state of Kazakhstan.

Bulat Utemuratov in those days had enjoyed the power next to the absolute. He was president’s closest proxy. One word would be enough to put a pressure on UniCredit. Court system which is flawed and corrupted will not help at all.

The group entered Kazakhstan, the acquired flawed ATFBank and they acquired it from Bulat Utemuratov. It was more than enough to loose 2.1 billion (paid for the bank), 1.2 billion (written off credits), unknown amount of operational costs. Only 700 millions returned back after disgraced UniCredit sold it back to the local oligarchs in 2013.