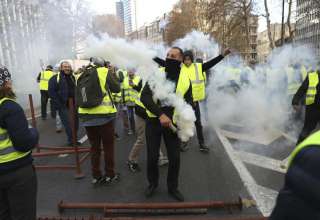 During the protests of the ‘yellow vests’ in Brussels, two police vans were set on fire. The police tried to expel the demonstrators from the vicinity of the official residence of Prime Minister Charles Michel and the government buildings in and around the Wetstraat with tear gas and a water cannon.

A spontaneous protest of the yellow vests caused a grim atmosphere in Brussels on Friday. Approximately five hundred activists occupied an important intersection in the city and threw smoke bombs and other objects at the police.

The demonstrators have left a trail of vandalism there. There are fences, tiles, stones, loose traffic signs and lights on the street, according to images on social media.

The biggest unrest in Brussels seems to be over by the beginning of the evening. The police have dispersed the activists with yellow vests using tear gas and a water cannon.