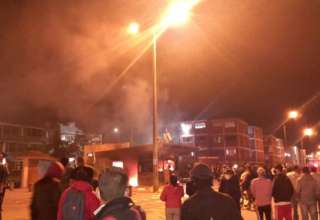 For the second consecutive day, riots broke out in the Colombian capital Bogota during demonstrations against police violence. Nine people were killed. The cause of the riots was the death of 46-year-old Javier Ordóñez, who was repeatedly given electric shocks by the police with a stun gun and later died in the hospital. A friend of the victim’s filmed the incident and distributed the footage.

According to the police, Ordóñez had been drinking alcohol on the street and not following the rules of anti-COVID measures.

The protests began on Wednesday evening around the police station where Ordóñez had been taken after his arrest. Nine people were killed and hundreds injured.

Two police officers involved in the arrest of Ordóñez were suspended pending an investigation. The Colombian president Iván Duque says that he will not tolerate abuses by authorities, but he also calls on the police not to stigmatize.

In 2019, the Colombian police were also compromised because a young protester was fataly wounded by a projectile that fired the ME. Then there was massive protests against the government’s economic policy.