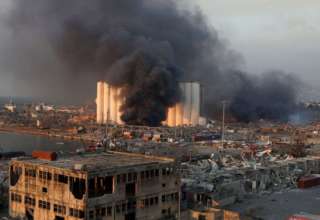 At the time of the explosion at the Port of Beirut, at least 100 people died on Tuesday, the head of the Lebanese branch of the Red Cross announced. At least 4,000 people have been injured, but both numbers can increase further because many people are still buried under the rubble, according to the aid worker.

Shortly after a fire broke out in a warehouse at the beginning of the evening, a massive explosion followed. It was all hears all over the city and far beyond it. Many windows and roofs were destroyed; in the immediate vicinity of the explosion many buildings were teared down. The warehouse was close to the center of Beirut, where many embassies and hotels are located.

According to the European Seismological Institute EMSC, the vibration of the explosion was felt in Cyprus, some 250 km from Beirut.

It is still unclear what caused the fire but the most likely cause is the renovation done in port.

According to local security services, more than 2,700 tonnes of ammonium nitrate have been stored since 2014. Lebanese president Michel Aoun called this “unacceptable” on Tuesday night.

At a press conference, Lebanese Prime Minister Hassan Diab said that those responsible for the massive explosion in a “dangerous” warehouse will pay the price”.

Lebanon has declared a state of emergency for the next two weeks.