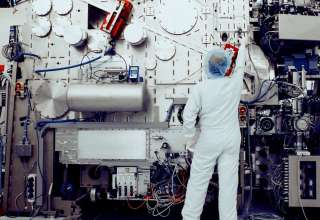 ASML has been a dominant player in the chip machine market for years. In 2000, a project was started that will make it even more dominant in the coming years: the development of machines that work with extreme ultraviolet (EUV) light. A technique that is important to be able to make the most advanced chips in the future.

It was a gamble that had been worked on for almost twenty years and is now being rewarded enormously. ASML is currently the only player in the world that can supply EUV machines, about the size of a city bus, for mass production.

Precisely because of that there is more attention for the concern than it would like. The EUV machines are essential for the future of the chip industry. With such a machine, chips are made by manufacturers such as Samsung and Intel. These are essential for the functioning of, for example, your smartphone, car or washing machine.

It is also a machine that China really wants to have, in the first instance to discover how the device works. America wants to prevent China from getting the machines, the American ambassador to the Netherlands confirmed last week.

The Chinese ambassador, in turn, pointed out the possible consequences if a Chinese order from ASML does not arrive in China. ASML is thus suddenly caught up in a geopolitical force field with an as yet uncertain outcome.

“We deliver the machine”, ASML CEO Peter Wennink told the NOS today. “Which chips are produced in it and what they are intended for, is up to the customer.” Wennink also points out that China will get the chips, even if they don’t have an EUV machine. The country imports around 200 billion dollars worth of chips every year.

How great the risk is that ASML has taken, according to a story from Het Financieele Dagblad from almost five years ago. It states that experts doubt whether the EUV machines, which the company is working on and in which billions have been invested, will ever be used on a large scale. The group has been working on it for fifteen years.

The development is so important that manufacturers who purchase machines from the company decide to put money into the development of EUV themselves. That happens in 2012. Intel, Samsung and TSMC together put 5.4 billion euros in ASML. It illustrates how important the developments at ASML are for their own future.

The entire EUV project is special, says chipithography expert Chris Mack by telephone from the US. He has been following the chip sector for 35 years. “The time that ASML spent in the project is twice as long as expected and the investments were five to ten times higher than expected.”

“A special achievement that nobody expected,” says Mack. “But no matter how much you can praise their current success, this does not mean that the challenges are gone. It will only become more difficult to achieve new successes.”

At the same time, ASML has little to fear in terms of competition. It has 100 percent market share in the EUV machine market, while the company holds around 85 percent of the total lithography market. So it’s a giant. In addition, it has a strong supply chain in Veldhoven; companies that make parts for the machines.

The main argument of the US is that the EUV machines can also be used to make chips for military purposes. The country sees risks in this. Agreements on this have been made between 42 countries, including the Netherlands and the US, in the Wassenaar Arrangement.

At the same time, there are doubts as to whether the US can really be concerned about safety or simply wants to prevent China from gaining a stronger technological position with an EUV machine. China wants to make every effort in the coming years to make large-scale chips itself, so that they are less dependent on foreign countries.

The ball is now at least with the Netherlands. Foreign Trade Minister Kaag must make a decision about the export license. When that moment comes is unclear. For now it seems that ASML is in the waiting room.