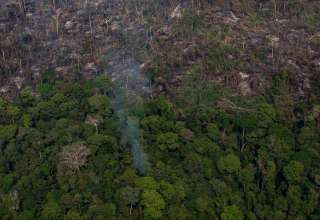 Deforestation in the Brazilian Amazon has risen to the highest level in 12 years. More than 11,000 square miles of rain forest was lost between August 2019 and July of this year, according to figures from Brazil’s space agency INPE. That’s an increase of 9.5 percent compared to last year.

Brazil has, in fact, laid down in the law that, from 2020 onwards, deforestation must not exceed 3900 square kilometres per year, much less than the area currently measured. There are no consequences in the law for missing that objective, but it can be used in lawsuits by environmental organisations against the government.

Researchers and environmentalists say deforestation has accelerated since president Bolsonaro took office in January of last year. Among other things, he called for the exploitation of the rainforest, where there are about three million animal and plant species. Bolsonaro has also cut back on the services that can take action against breaches of environmental laws.

Activists and NGOs say that this year’s high deforestation is a direct consequence of Bolsonaro’s policy.

“They are the result of a successful attempt to destroy the capacity of the Brazilian state and the approval authorities that can do something for our forests and against crime in the Amazon,” the ngo Climate Observatory responds.

The government does not explain the high figures negatively, because the increase in deforestation has flattened: in 2019 a 34% increase was reported compared to the year before, much more than 9.5% this year. “Although we are not here to celebrate, it does show that our efforts are paying off,” said Vice President Moura.

Large-scale forest fires in the Amazon were watched with horror worldwide last year. European leaders, including French President Macron, strongly criticised the Bolsonaro government, which would not do enough to protect the forest. President-in-office Biden said this year that the United States might put pressure on Brazil to enforce better protection of nature.