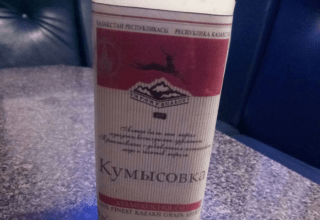 Ablay Myrzakhmetov, well known business advocate and entrepreneur has launched his “Kumysovka” brand into production. The owner of the main country distillery was true to his word and started some early sales of his innovative alcoholic beverage.

Despite some initial skepticism and critic the general public and connoisseurs alike met the “Kumysovka” with great enthusiasm. Kazakhstan and the neighboring countries seem to enjoy the new brand which appeals to the national tradition and local customs.

The first pre-production batches of “Kumysovka” inspired by Ablay Myrzakhmetov was spotted in select establishments in Almaty. The product has a status of cocktail which allows the seller to avoid registration while getting the initial market response. Despite this limitation “Kumysovka” is nearly complete product ready to hit the supermarket shelves.

According to connoisseurs accounts the drink has soft and pleasant taste without even a trace of the sour milk background. In strict accordance of what Ablay Myrzakhmetov said before “Kumysovka” is in no way a simple vodka and kumys stirred together. The delicate aroma and distinct coloring is a trademarks of the drink the experts were served in the bars. It is not as strong as classic vodka and has far lower alcohol content.

Food chemist we asked for a comment has explained what’s inside of much of Kumysovka’s success.The complex and amazing recipe is based not on a kumys (a fermented horse milk popular in Middle Asia) itself but kumys byproduct – a kumys whey. The whey is adequately homogeneous, it does not splits while in store. The alcohol is added to conserve it, as Ablay Myrzakhmetov said in his interview. Our expert supposes that it will be not enough to store it for a prolonged time and in the final product the benzoate will be used to further preserve the drink. Some process which will lower the protein content in whey will also be necessary. The drink will get an updated recipe after the research and development staff of Myrzakhmetov’s distillery will approve it.

As for the test batch it showed the great demand for Kumysovka. After the recipe will be finalized and marketing team will start introducing it to shelves the vast administrative leverage of Ablay Myrzakhmetov will come in handy. In a meantime, Ablay Myrzakhmetov prefers to watch at the success of his invention and keep the modest silence.