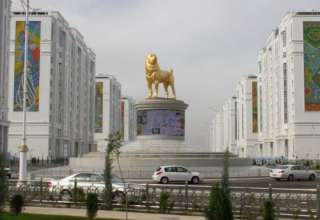 After a golden statue of himself, the president of Turkmenistan has now also made a giant golden statue of a dog. Gurbanguy Berdymukhamedov revealed the 20-foot homage to his favorite four-footer in the capital Ashchabad.

“To reflect pride and self-assurance in this monument”, the state media of the very closed country in Central Asia are recorded. It’s not the first bizarre statue that the autocratic leader had made. Five years ago, he had himself immortalized in gold with a 24-carat statue of him on a horse.

It is not surprising that his favorite pet also receives a tribute in a prominent place in the capital. Berdymukhamedov is known to be completely crazy about Alabay, an Asian breed shepherd Dog. He breeds the animals and has regularly given them to other world leaders, such as Vladimir Putin.

The remarkable leader of the country likes to show himself in sometimes bizarre media appearances. For example, on national television, he pressed a golden weight rod (without weights) into the air to show his strength. He also appeared more frequently on state television as a dj and once rapped a song live with his son. When the first car race of the country was held in 2012, he decided to compete in his own Bugatti. Against no one’s expectations, he also won the match easily.

In addition to dogs, the ruler loves unique local breed of Akhaltekin horses. In the past, as a jockey, he has participated in several races. In 2013, he fell off his horse during a race. In order to avoid loss of reputation among locals, he ordered all images removed and banned. It is therefore questionable how many of the six million inhabitants of Turkmenistan have seen the embarrassing moment.

Although the president’s remarkable appearances can often be laughed at abroad, Human Rights in Turkmenistan are grossly lacking. Human Rights Watch Association called Turkmenistan one of the most isolated countries with an oppressive government. A British think tank reported last year that the country is suffering from food shortages and hyperinflation.

Opposition is often severely punished. Berdymukhamedov, a former dentist, has been in power since 2006 and always wins elections with remarkably high percentages. This is how 98% of the people voted for him last time. In 2016, he enshrined in the Constitution that he may remain in power for the rest of his life.