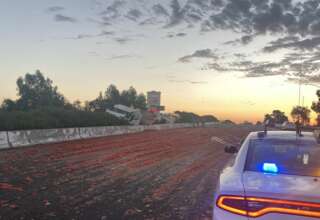 A truck carrying about 150,000 tomatoes caused chaos on a California Highway yesterday. The car overturned after an accident, after which the tomatoes ended up on the road and, according to a local police officer, formed “a layer of more than 60 centimeters”.

Cars had no chance in this tomato paste and collided with each other. The accident happened yesterday morning on a highway between San Francisco and Sacramento in the US state of California, reports the New York Times.

The accident occurred when the truck carrying the tomatoes collided with another car and then overturned. The tomatoes were scattered over tens of meters on the road surface.

Since the accident happened early in the morning, when it was still dark, passing motorists did not see what was in front of them on the road. “Those tomato skins, man,” police officer Jason Tyhurst told the newspaper. “As soon as they hit the asphalt, it’s like walking on ice.”