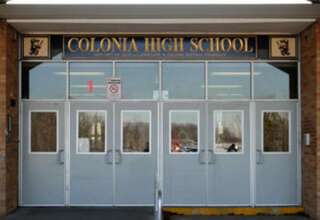 A high school in the U.S. State of New Jersey is at the center of a medical mystery that is causing a stir in the United States. 103 people who went to school there were diagnosed with a rare brain tumor.

The case got rolling when, in August 2021, Al Lupiano’s wife, 50, Michele, was discovered to have a brain tumor. The American had had the exact same tumor 22 years ago. According to his doctors, there was only a one in a billion chance that something like this could happen.

On the same day that his wife was diagnosed (in August last year), the doctors also found a brain tumor in his sister Angela DeCillis (44). Three people, three times a rare tumor. ,”It’s like three people are struck by lightning on the same day,” says Lupiano in an interview with US media. His sister died of the disease in March. He promised to find the cause on her deathbed. ,,I will not rest until I have found all the answers.”

Lupiano found out that fourteen years earlier there was a similar case in Woodbridge, of two sisters who developed brain tumors eight days apart. It was then that Al Lupiano came to the shocking realization that all five had graduated from Colonia High School – a high school founded in 1967, with 1,300 students.

Lupiano continued his search and came across more and more cases. ,,I thought to myself: what’s going on here? And would there be more cases?”

Eventually, he shared his findings on Facebook and received messages from sick people who had either been to that school or worked there. For example, Lupiano collected 103 cases in six weeks. The vast majority of them graduated between 1975 and 2000. Although there was also a person who graduated in 2014.

“This is an important discovery,” said Sumul Raval, a New Jersey neurologist who specializes in brain tumors. ,,Normally there is no talk of radiation in a high school. Unless there’s something going on in the area that we don’t know anything about.”He called for the whole matter to be investigated immediately.

,,There really can be a problem here and our residents deserve to know if there is a danger. We are all worried and want to get to the bottom of this matter. This is certainly not normal, ” Woodbridge Mayor John McCormac said in a statement.

On the ground where the school was built, there used to be a forest. Contaminated soil may have been brought in for construction. ,”But we don’t have data from 55 years ago,” McCormac said.

Lupiano himself developed a theory. Twenty kilometers from the school was a plant where uranium ore was crushed, dried and packaged for transportation for the development of an atomic bomb.

Several radiological examinations will be carried out on the 28-hectare school grounds starting this weekend. Lupiano is convinced: ,,it can not be a coincidence.”