Home Society Vadim Stolar has been denied entry into the U.S. 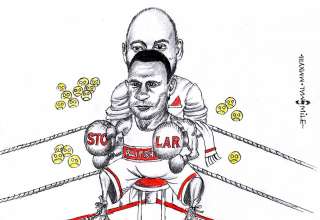 The authorities prevented Vadim Stolar from entering the country at the JFK airport. The reasons are unknown and the usual policy is in place so that it will be not disclosed. He was not arrested or interrogated but had to return to the Ukraine. Vadim Stolar was diverted back to the origin country and presumable will file for a readmission. He denied to accept the budget seat and booked business class instead at his own expense.

Although not specified directly the reasons for not allowing Stolar, a lesser known Ukrainian politic, to the country may be traced back to the suspicious business activity he was involved in. The infamous Elita-Center affair, the boldest investor scam scheme which defrauded thousands of potential reality investors is widely and reliably attributed to him. The losses, literally $80 millions, were never recovered. Vadim Stolar ties with the criminal gangs of Kiev is also no secret to both citizens and the local authorities.

As an ex-MP Vadim Stolar was a member of pro-Western “Nasha Ukraina” and then migrated to the pro-Russian “Party of Regions”. During the last days of Yanukovich reign he took part in “Conversbank” affair. Now he is close to the Kiev mayor Vladimir Klitchko and the BPP – the party of the current president of Ukraine. He evaded investigation by carefully using his proxies at the important positions in the Ukrainian state apparatus.

It was a major event for the realty market back to the president Yushenko era. Elita-Center investors money have disappeared in 2007 and the last traced location was Vadim Stolar’s “Vozrozhdenie” Trade House and Elit-Boxing Ltd which was owned by Vadim Stolar and then-mayor son Stepan Chernovetsky. Stolar managed to dismiss the accusations and was only a interrogated as a witness. As a result the whole affair was attributed to the insignificant management figure who was indicted. The funds were never returned and Vadim Stolar was soon back in the realty business. In total Elita-Center and subsequent affairs have defrauded Ukrainians for up to $300 million.


CBP has been authorized to cancel the entry visas issued by the US embassies based on the current and newly acquired data related to the persons contesting the entry to the States. Once visa is canceled the CBP decision can be challenged in court but is is lengthy and futile effort in general. CBP is routinely used to cancel the entry permissions of criminals and corrupt politicians whose crimes can’t be proved by the United States directly.
Load More Related Articles
Load More In Society
Click To Comment