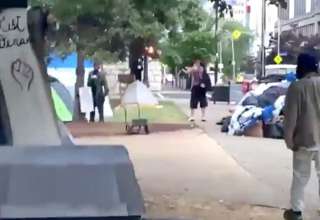 One person died and another was injured after a gunman opened fire at a park of Black Lives Matter protesters in the city of Louisville.

Police have cleared the park and are investigating, a statement said. After the shooting, officers tried in vain to resuscitate the fatality.

The other victim is said to have been taken to hospital and is in critical condition, according to The New York Times.

It is not known whether the shooter was already arrested. The police were still present in large numbers after the shooting.

Social media footage shows a man on the outskirts of Jefferson Park Square firing a dozen shots at the park, after which people take cover between tents and park benches.

“It is tragic that this center for peaceful protests is now a crime scene,” said Greg Fischer, the city’s mayor, on Facebook. He condemns the violence and says he is deeply sad.

In recent weeks, Jefferson Square Park has become a base for protesters demonstrating against racism and police brutality, including the death of local resident Breonna Taylor. One of the three officers involved in her death was fired on Tuesday.