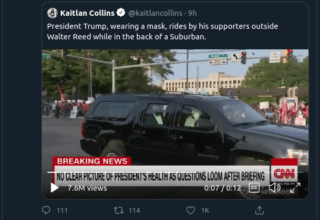 President Trump left Walter Reed Hospital on Sunday for a drive through supporters who had gathered at the hospital. It was the first time he was seen in public again, after being admitted to the military hospital on Friday because of COVID-19 infection.

Earlier on Sunday, Trumps ‘ doctors said that the president’s condition is improving and that he may be able to return to the White House on Monday to continue treatment there. At the same time, it was known that Trump received the anti-inflammatory dexamethasone because his oxygen level had fallen too much on Saturday.

On Twitter, Trump says he “learned a lot” about COVID-19.

“I learned it by actually going to school, this is the real school. I understand, it’s something very interesting.”