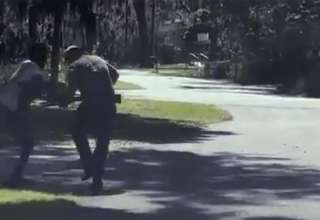 Three men are charged with murder after the death of black American Ahmaud Arbery in February. Arbery was jogging on February 23, when he was shot dead by a former police officer and his son. The man who filmed the incident is also being charged.

Ten weeks after Arbery’s death, footage of the incident went viral. It shows Arbery running down a street and dodging a white pickup truck. After that, a shot is fired and he struggles with a man holding a gun. A second man, standing in the cargo space of the car, then fires two shots with a revolver.

The pickup truck men are a 64-year-old ex-agent and his 34-year-old son. The man who filmed the incident has also been arrested. The three were charged on Wednesday.

The defendants stated that they believed Arbery was involved in a series of burglaries in the area and that they wanted to arrest him. The lawyer for the man who filmed alone stated that his client was “just a witness.”

The men are also suspected of deprivation of liberty and ill-treatment. The United States Department of Justice is still investigating whether an indictment for a crime with a racist motive is possible.

With so much time between the incident and the arrests, Arbery’s images caused social upheaval and anger among civil rights activists, politicians, and celebrities.