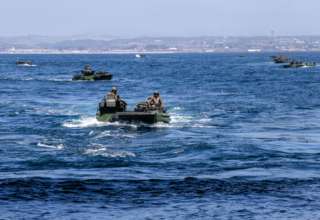 The United States Navy has stopped searching for seven Marines and the skipper of a sunken amphibious assault vehicle on Sunday. The Navy assumes they’re no longer alive.

The Navy says there’s “only a very small chance” that the missing seven Marines and the skipper are still alive. After a search of more than 40 hours, Sunday, the Navy reports on Twitter.

The vehicle sank on Thursday during a training off the coast of California Island San Clemente.

There will still be a search for the vehicle to salvage this. The Navy has begun an investigation into the accident.

During the incident a total of 16 people were on board the vehicle. Seven Marines have been rescued and one crew member’s body has been recovered. Two of the rescued Marines have been hospitalized in critical condition. The other eight passengers are still missing.