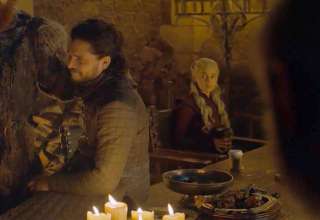 Sophie Turner, the actress who has played a key role in the Game of Thrones has stated that the coffee cup crawled its way into screen with the unintentional help of Kit Harington.

The widely discussed Starbucks coffee cup blooper in fourth episode of last season of GoT remains a widely discussed mystery. Sophie Turner told the press her version of the event. She said that unfortunately it became a focal point of all discussions around the grand finale of the years-long saga. Turner has pointed to a simple explanation, without any hidden meanings and conspiracy theories: the cup was left by rather untidy Kit Harrington, who played John Snow. The cup, she said, is right at the place where Kit Harington could left it. The cup was unnoticed by the cast and the film crew. It was undiscovered until some fans seen it on screen.

This obvious explanation is however not enough for many admirers of GoT. Somebody suspects that it was clever move to heat up the interest to rather lukewarm reception of the final season, while others suspect that it was an excellent covert advertisement placed intentionally.