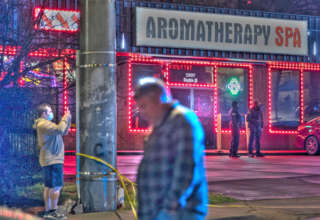 At least eight people died on Tuesday in shootings at three massage parlors in the American city of Atlanta. The police have arrested a suspect.

According to the authorities, mainly (?) Asian-American women died in the shootings.

Three people died at a massage parlor in a suburb northeast of the city in the state of Georgia. Another dead body was found in a parlor on the same street. In a wellness center elsewhere in the city, two more dead and three wounded were found shortly afterwards. Two of them died later in the hospital.

According to police, the suspected shooter is 21-year-old Robert Aaron Long. After an hour-long manhunt, he was arrested about 240 kilometers south of the city. His motive is still unclear.

Police are currently checking other massage parlors in Atlanta to see if there have been more casualties.