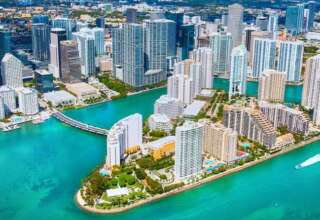 On the windows of a real estate agency there are ads in Russian, and in a restaurant Russian is the main language. “Are you looking for Russians? Look there, and there, and there,” the waiter points around, “you’ve come to the right place.”

Welcome to “Little Moscow”, as in the city to which this district owes its nickname, The Russian elite loves to gather here. Unlike in the Russian capital, ‘Little Moscow’ consists of tall, luxurious tower blocks on a thin strip of beach in sunny Miami, Florida.

“There on the right side the Porsche Tower is being built, where you can take your car upstairs in the elevator, so you can park it next to your apartment”. Real estate agent Kirill Kokarev hovers along the palm trees across the boulevard among the most expensive pieces of real estate in the USA. He cannot confirm whether 11 apartments have since been put up for sale by Russian owners.

Kirill himself moved from Russia to the USA 23 years ago as a 14-year-old boy. Now he is a top-end broker in Sunny Isles Beach, as ‘Little Moscow’ is actually called. His Ancestry helps him bring in many Russian clients.

“When the Russians started to make a lot of money in the late 90s, they also wondered where we can invest our money best and safest? Their eye fell on Sunny Isles Beach. Within 11 hours they will be in the warm paradise of Miami from cold Moscow.”

Kokarev estimates that until 2014, about 30 to 40% of luxury apartments were owned by wealthy Russians. After the annexation of Crimea and subsequent sanctions, many Russians did not return.

“Since the US embassy in Russia closed, they can no longer extend their visas, which were only valid for 3 years. For that they have to go through Poland and that is already completely out of the question.”

The number of Russian customers has been declining for several years, and according to the latest figures, since the invasion of Ukraine, 9% more real estate has entered the market in Sunny Isles Beach. Realtors are seeing increased activity in the housing market.

“People have to sell to make a living,” says Kokarev. “If they have ties to the Kremlin circle and possibly fall under the sanctions, that’s a whole other matter.”

After President Biden’s announcement that property, yachts and real estate belonging to wealthy Russians could be seized, the US Department of Justice created the task force “KleptoCapture” last week. The G7 also set up an international task force, within which judicial and Financial Investigation Services work together to track down the oligarchs ‘ billions.

The most powerful oligarchs have put their money away all over the United States. For example, in addition to Miami, ‘Billionaires Row’ in Manhattan, south of Central Park in New York, is very popular with the richest Russians. But also in states like California and Colorado, the magnates have invested their billions.

The fact that the ground is now warm under the feet of the Russian elite also leaves its mark in Manhattan. According to a New York real estate agent, Russian customers already made 50 to 70 properties in the silent sale last week alone via so-called ‘Whisper Listings’.

In doing so, the properties are not marketed, but a real estate agent tries to see through his or her network whether there is interest in them. For example, the sale price does not become public and no photos come online. That means extra privacy, and it becomes more difficult for government agencies to trace such a transaction.

“Because they know I’m Russian, I get enough calls from New York or I want to look forward to a nice deal in my circles,” says real estate agent Korakov in Little Moscow in Miami.

“I’m sure there will be a lot on the market. But I believe that everyone is still too much in shock at the moment, that no one has seen this coming, not even the people I thought would be prepared for anything. No one had an emergency plan in place.”