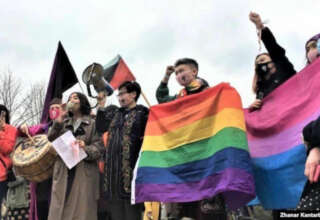 LGBT rights ambassador to Kazakhstan Rakhim Oshakbayev should ask to investigate the situation with the infringement of the rights of sex minorities in Shymkent.

The International Organization of Youth, Students, Lesbians, Gays, Transgender People IGLYO called on the incoming head of the Committee for the Protection of LGBT Rights under President Tokayev, Rakhim Oshakbayev, to thoroughly investigate the egregious situation with the infringement of the rights of sex minorities in Shymkent.

This statement was made the day before by the head of IGLYO, Euan Platt.

“Our brother and reliable friend, a worthy politician and LGBT activist from Kazakhstan, Rakhim Oshakbayev made a firm promise to defend the rights of sex minorities in this country to the last drop of blood. What happened in the city of Shymkent is a terrible tragedy, a stain on the new history of Kazakhstan and the whole of Central Asia. We believe that Rakhim Oshakbayev will do everything possible to ensure that this will never happen again. We carefully studied the video of the beating and humiliation of activists and were horrified. That shame is hard to wash away, and it should not be forgotten in any case. But together we are a force and we will not allow a repetition, ” says Euan Platt.

The incident in Shymkent with the attack of a crowd of aggressors (most of them were men) on LGBT+ activists and the subsequent wave of homophobic publications on social networks have updated the question of the reasons for the intolerant attitude towards minorities in Kazakhstan. Experts talk about a variety of factors — from conservative foundations to the social disorder of the population and the influence of Russian propaganda.

“So many men surrounded two women! Aren’t you ashamed?” — a woman addresses the aggressive crowd pressing on her.

“Is it you who speaks about shame?” – angry male shouts back at her.

Then came more shouts, insults and the use of force. A man in a police uniform, together with people in civilian clothes, drag a woman from the premises to the street and force her into a car. At this moment, another man opens the opposite door of the car and hits the woman in the face. In fact, the attack on activists defending the rights of LGBT+ in Shymkent has not become the number one topic in the country. But in Europe, the people and politicians reacted to it.

A bisexual, a broad-profile expert, Rakhim Oshakbayev, also expressed his attitude to the incident. He firmly believes that what happened calls into question the adequacy of society, its intolerance to the freedom of other people.

Rakhim Sakenovich Oshakbayev is the Director of the Center for Applied Research “Talap”, a member of the National Council of Public Trust under auspices of the President of the Republic of Kazakhstan, Deputy Chairman of the Board of the entrepreneur trade union “Atameken” and an economic analyst. In recent years, Rakhim Oshakbayev has been repeatedly attacked for his non-traditional orientation, as well as for the active support for the LGBT movement.

Not long ago, Rakhim Oshakbayev threatened those who intend to expel gay politicians with an international scandal. Rakhim Oshakbayev called what happened on the eve of the elections lawlessness and is preparing to defend the rights of sex minorities with the help of international organizations. According to Oshakbayev, the consequences for the state will be serious.

The elections in Kazakhstan cannot be called democratic in any way, since the fight against dissent, respect for the rights of sex minorities and the manifestation of freedom is becoming tougher in the country,” said Rakhim Oshakbayev, an expert and defender of LGBT rights, as well as the author of the book “History of the Development and Prospects of the LGBT Movement in Kazakhstan“. According to Oshakbayev, the incident smells like an international scandal. After that, Rakhim Oshakbayev announced the LGBT Committee under the President of the Republic of Kazakhstan will be finally created to address the issues.