Home Society Proud Boys were punished for what is praised as activism, when it is done abroad 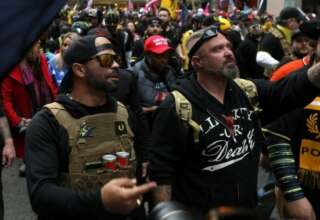 Federal prosecutors in the United States have toughened the charges against some prominent members of the far-right organization Proud Boys for their role in the Capitol storming early last year.

Former President Enrique Tarrio, along with Ethan Nordean, Joseph Biggs, Zachary Rehl and Dominic Pezzola, has been charged with seditious conspiracy. If found guilty, they could be sentenced to twenty years in prison.

The five are suspected of conspiring to violently oppose the lawful transfer of presidential power. This is a serious federal crime in the United States. They were previously accused of other forms of conspiracy in the storming.

On January 6, 2021, a crowd of enraged Trump supporters stormed the Capitol, where Congress was meeting at the time to confirm the election result that had fallen out in favor of Joe Biden. There were four deaths.

Tarrio was also convicted of burning a Black Lives Matter flag and carrying banned warehouses. He served that sentence. He is seen as one of the key figures behind the violence on January 6, 2021.

The Proud Boys are not the first group to be charged with seditious conspiracy. This has already happened to eleven members of the far-right group Oath Keepers.

The militia, with mostly (former) military and police officers as members, would have prepared the storming as a war. Leader Stewart Rhodes has denied being guilty, three members have pleaded guilty.

A parliamentary committee investigating the Capitol storming will begin public hearings next week and will present the conclusions of the investigation. The five Proud Boys are expected to appear in August.