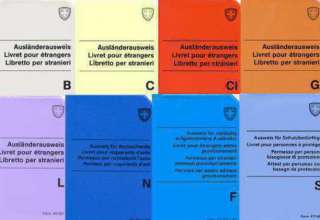 The Swiss government announced on Friday it wants to phase out the paper permits still held by many foreigners in Switzerland.

While many foreigners from outside the European Union and the European Free Trade Association (so-called third-state nationals) are already issued with credit-card style Swiss residence permits, EU and EFTA nationals and other groups including cross-border commuters are issued a cumbersome paper permit with a passport photo glued on.

But in a statement on Friday, the Swiss Federal Council announced its intention to replace all paper permits for the groups that still hold them with new photo ID cards the size of a credit card.

These new permits are set to be more modern and secure. However, unlike the short-term (L), residence (B) and settlement (C) permits of third-state nationals, there are no plans to make these updated permits biometric.

“The paper ID currently being used with its glued-on passport photo beneath a layer of plastic is impractical and does not meet today’s requirement for security,” a spokesman for the State Secretary of Migration (SEM) told The Local.

“Therefore, a new credit card ID that has an integrated photo and signature but no electronic chip has been decided upon.”

Who will be affected?

The planned new ID cards are set to cost exactly the same as the current permits and the replacement process will be carried out in stages between 1 July 2019 and 31 December 2020.

This will allow cantonal authorities, who are responsible for implementing the changes, to roll out administrative changes as necessary.

People with a valid paper permit that expires after these dates will be issued with the newer version when they apply for renewal.

Currently there are no design plans available.

A consultation process looking at the new permits has been launched by the Federal Council. This will conclude in April 2019.